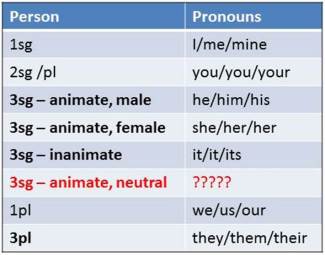 I have often said that it can be frustrating to be an expert in language, because our expertise often goes unrecognized. Language (like culture, or society, or education) is something that is a significant part of everyone’s life, and, it seems, it is therefore something that most everyone feels qualified to speak on. This is especially true among the extremely well educated circles of academia. I often find myself trying to unpack the assumptions held by colleagues in other disciplines in a way that I suspect nuclear physicists never have to do, for example.

It’s hard to imagine a more obvious illustration of this frustration than the continuing saga of University of Toronto psychology professor Dr. Jordan Peterson and his crusade against gender neutral pronouns. If you are unfamiliar with the story (ed: If you are, can I come live where you are?), here are a couple of articles from last fall that outline how this became a story in the first place, and here is a recent piece of commentary that outlines what’s happened to Peterson since he first became an international news figure. For a really thorough set of posts on this issue, the Medium site Trans Talk by sociocultural linguist Lal Zimman, who is an expert in language and trans identities, is definitely the place to go.

To be honest, I don’t really want to talk about Jordan Peterson, because he clearly thrives on this negative attention, but he has come back into the news in the last few weeks for a couple of reasons – first, a variety of news outlets praised him as one of the most interesting people of 2016, reveling in what they called his brilliant and brave takedown of the political correctness machine. Second, he is teaching classes for the first time since he declared his refusal to respect students’ requests to be referred to by pronouns of their own choosing, so the possibility that complaints will be lodged has become more likely. And just as with the original rounds of media coverage in the fall, I find a series of familiar patterns in the way the news media reports on Peterson’s claims – while there is generally some effort to critique or present alternative perspectives to his views on gender as an inherently binary concept, his comments about language and how it works are rarely interrogated. As I have looked through media commentary about Peterson, I have not found a single example of a story that references an expert on language, or a public debate at which a linguist or linguistic anthropologist has been invited to offer rebuttals about this aspect of Peterson’s claims. This is not to say that I think the people invited to respond to Peterson, including scholars of gender and scholars who are themselves gender nonconforming, are unqualified or inappropriate. There are, however, dozens, if not hundreds, of experts in language and gender including several located in Toronto, who could provide some very important insights that are, as far as I can tell, absent from most of this discussion.

As a result of this omission, some key elements of Peterson’s argument, and the arguments made by those who support him, are left to side discussions on linguistic blogs (ed: so we’re not really helping, then) or social media. For example

These positions are rooted in Peterson’s personal ideological positions about how language works, and, as each of them shows, they rely upon the erasure of specific types of information that would expose the fragile basis of his understanding. Peterson roots his authority about language in one basic point – he has studied the psychological impact of totalitarianism, which includes widespread linguistic control, and he believes that any hint of linguistic control is therefore diagnostic of totalitarianism. That there are an infinite number of subtle and not-so-subtle differences between absolute censorship of disagreement and terminological planning and being asked, even with the possibility of some form of sanction, to respect what people ask you to call them in a setting in which they receive access to a vital social service (like education), does not seem to register within his expertise.

Whenever these kinds of debates emerge about the nature of language, the trajectory of language change, and the relationship between language and social beliefs, it’s vital to examine what forms of authority are marshalled in defense of each position, and what forms of authority or knowledge are erased and rendered irrelevant. I think Peterson’s positions on gender, power, and culture are abhorrent, but they are far from rare. What I think is even more frightening is that journalists and the general public have no problem tacitly promoting his views on language by failing to call them into question or to interrogate the nature of the authority he claims about it.

Every semester, on the first day of class, I pass out an index card and ask students to write down four things – their name as it appears on the university’s registration list, the name they actually want me to call them (with pronunciation guide if it might help), their preferred pronoun, and a picture or description that might help me remember them. I consider this to be a basic act of respect, and it sets a tone, especially in linguistic anthropology classes, that situates the language we use in a context of understanding dynamics of social relationships and power. Eventually, this becomes a direct topic of conversation, and we engage in a discussion of how the recent spike in awareness about non-binary gender identities has created a need for linguistic adaptation. I talk about how “singular they” was the American Dialect Society’s word of the year in 2015, and what that implies about both language and social change. And since this is later in the term, when we’ve had a chance to get to know each other an establish terms of respect within the classroom, a few students usually share some nuanced reflections on the implications of binary gender in both language and society. It’s a rich conversation, and an excellent, concrete learning opportunity for many people, myself included.

Peterson has received a great deal of both moral and material support for his position, while transgender students at his university receive death threats and violent opposition to their very existence. The one thing that Peterson is right about is that these pronoun choices matter a great deal, and using them is a very powerful act. It is deeply unfortunate that neither he, nor the media, seem to be willing to engage with linguistic experts about how this power works, because a lot could change if they could really hear this.

4 thoughts on “The Authoritative Voice in the Pronoun Debate”