This summer I’m teaching a course on Archaeological Field Methods (Anthropology 396). It runs for six weeks and I’ll (try to) post a summary at the end of each week. My preparation for this course began last summer when, long story short, I was put in contact with a PhD student from the University of Chicago, Haeden Stewart, who had a number of our students volunteer with his project, the Mill Creek Historical Archaeology Project (MCHAP). After some discussion and much thought I agreed to run a field school during Summer 2017 that would provide our students an opportunity to get formal training and credit, while providing Haeden with much needed bodies for his field research. It would also provide me with the unique opportunity to get back in the field (I was last in Tanzania in 2010) but stay in the same city as my kid. Haeden and I had to do paperwork to get the required permit and to ensure that the Archaeology Branch was satisfied with this unique hybrid of a field school and research project. After advertising the course and reviewing applications back in January and February, I ended up with eight students enrolled in the course. All of the students were excited by the opportunity to learn archaeology in their own backyard, as it were, which meant that the course costs were relatively low. We had a pre-field orientation session in the lab on June 22nd to discuss supplies, safety, and ethics, and to introduce MCHAP.

The course officially started on July 4th; our first day began in the lab – we loaded up the supplies I’d been accumulating over the past few months in my car and headed down to the site. Haeden met us there and took the students on a tour of our field site, Mill Creek Ravine, a vibrant park in the heart of Edmonton.

Haeden showing the students the location of the 2016 MCHAP excavations, which focused on the shantytown of Ross Acreage.

Haeden’s research examines the relationship between industrialization (the development of infrastructure, the standardization of commodities, and the development of a labouring class) and settler colonialism in the context of early twentieth century meat-packing plants in Edmonton. Mill Creek Ravine is a cultural landscape of deep history and of competing and contrasting claims from Indigenous groups, the local community, and the municipal government. It was the center of the early Albertan meat-packing industry as well as one of the sites of the most blatant appropriations of an Indigenous reservation at the end of the nineteenth century. After the construction of the Edmonton, Yukon, and Pacific Railway through Mill Creek Ravine in 1901, the area became one of the first major sites of industrial production in the city and the province. By 1910, three large meatpacking plants (Gallagher-Hull’s, Vogel’s, and Gainer’s) were located along Mill Creek, employing approximately 1 in 8 of Strathcona’s male population. By the end of the First World War, economic depression and incoming European settlers produced numerous ad-hoc shantytowns throughout Edmonton, including one of the largest and most stable informal shantytowns along Mill Creek. This shantytown, known as Ross Acreage, lasted until the 1940s and at its height consisted of over fifty shelters. Haeden’s fieldwork in 2016 focused on locating and excavating Ross Acreage. In order to uncover the history and impact of early industrialization in Edmonton, our focus this season will be on surveying, sampling, and excavating the first of these meat-packing plants, Vogel’s.

Following the tour we got right into Shovel Test Pits (STPs). The strategy for the placement and execution of STPs was explained – three main areas (labelled A, B, and C) were identified based on pedestrian and ground penetrating radar (GPR) surveys conducted prior to the start of the field school. Our STPs are 35 cm x 35 cm in size, excavated in 10 cm levels to a depth of approximately 70 cm. As the location of Vogel’s could be established through the use of archives, the STPs are used to establish the exact placement of the buildings and thus to inform the excavation strategy. The tools required were listed and their use was explained; how to fill out the necessary and critical forms for documenting context, method, and finds was also discussed at length. Finally it was time – the satisfying crunch of shovel cutting into turf was heard as the students conducted their first ever STPs. 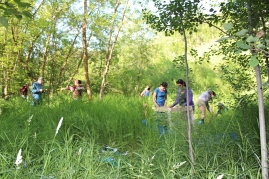 The rest of the first week focused on STPs. In all 25 STPs were excavated in the three areas. Plastic, glass, clinker, bone, brick, cement, and various metal objects (mostly nails) were carefully extracted to the thrill and delight of our students. Honestly! It is hard to capture in words but all were excited by their first finds while I was excited to see them learn how to first identify something as an artifact then to distinguish different artifact types. The amount of learning that occurs in that first week is immense. 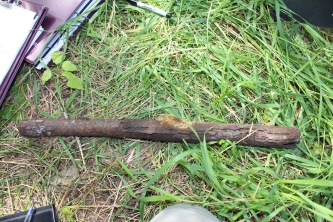 During week one, the students faced high temperatures, a veritable fog of mosquitos, and much interaction with the public (people are constantly hiking, biking, or walking with and without dogs throughout the ravine and thus the site). Chief Bruno of the Papachase came by to share with our students some of the Indigenous history and use of the ravine, Edmonton, and Strathcona. We were also visited by local media, which resulted in an article in the Metro newspaper and a CTV interview featuring yours truly (our feature is around the 7:30 mark). The realities of being in the field, and becoming familiar and dealing with the unique attributes of each field setting, are also part of that critical learning curve.

Our week concluded by heading to the lab, where students got set up for cleaning their finds (we’ll start cataloguing and analyzes in the second lab during week two). While a field methods course, I have also built in a significant lab component as I firmly believe that students should not only learn how to excavate but also how to clean and catalogue, and begin the analysis, of what they recover.